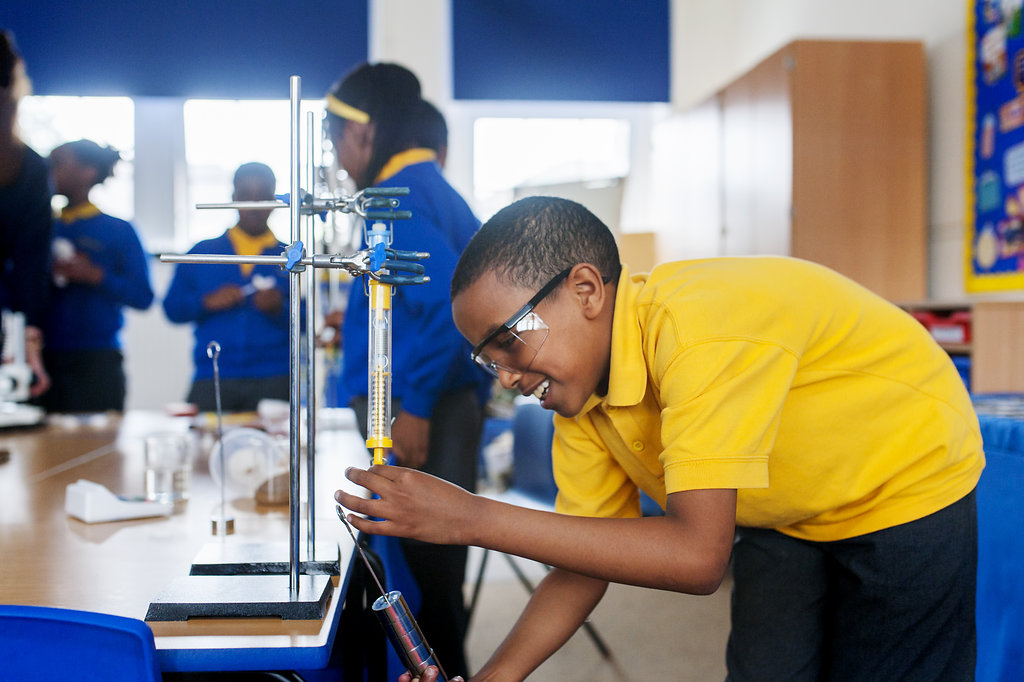 Science is taught throughout our school, from Nursery to Year 6 your child will develop their understanding of Biology, Chemistry and Physics. Our lessons are planned to develop not only subject knowledge but also the ability to ask and investigate scientific questions.

Science is taught throughout our school, from Nursery to Year 6 your child will develop their understanding of Biology, Chemistry and Physics. Our lessons are planned to develop not only subject knowledge but also the ability to ask and investigate scientific questions.

In Key Stage 1 and Key Stage 2 your child’s Science lessons will be taught through our school’s Topic Curriculum; whereby pupils study all areas of the Science National Curriculum through themed topics of study. The Topics we teach have been carefully selected to match the interests and lives of our pupils. Science lessons are often practical and we have a large variety of high-quality resources that are used to make lessons engaging, promote curiosity and bring learning to life!

We hope the information below will give you more of an insight into Science at Devonshire Hill.

We have become space biologists and embarked on a voyage of discovery by growing seeds that have been into space!

In September 2015, 2kg of rocket seeds were flown to the International Space System (ISS) with astronaut Tim Peake, where they spent several months in microgravity before turning to Earth in March 2016. We have received 100 rocket seeds which we are growing alongside seeds that haven’t been to space. Six lucky pupils were selected to be involved in the research project.

Before breaking up for the Easter holidays our Serious of Science (SAS) Club planted various vegetables at school. The pupils were asked to work in collaboration with their families at home to grow the plants over the school holidays and record their observations. The pupils compared how long each plant took to germinate and how the growth rates of the plants varied.

Our Year 6 pupils have spent a week at the Haringey IntoUniversity centre.  Their ‘Being Human’ week focused on varies areas of human biology and encouraged them to think about possible STEM (Science, Technology, Engineering and Mathematics) careers. They visited Imperial College University, which specialises in Science, to find out more about life at university. They thought about what we might like to study in the future.

This week Year 6 visited ZSL London Zoo and took part in a maths session all about Asiatic lions. They found out about their conservation and how zoologists and researchers work to protect these endangered creatures. They used their mathematical skills to solve conservation problems involving weights and measures, pie charts and ratios.

This week SAS Club used Archimedes Principle to find out whether the planet Saturn would actually float in water. The pupils used their ability to divide decimals to calculate the density of different objects and predict if an object would float. They found out that all objects with a density of less than 1g/ml float and as Saturn has a density of 0.67g/ml it would float in water!

As part of their IPC topic Being Human our Year 6 pupils conducted a heart dissection! After learning what the parts of the human heart were called they made observations whilst dissecting lambs’ hearts. The pupils were able to identify where the superior vena cava was, see the four chambers of the hearts and discover what it’d be like to be a surgeon!

Our Reception children have been investigating whether different materials would float or sink.

As part of their IPC topic ‘Extreme Survivors’ pupils in Year 5 have been using identification keys to identify the various invertebrates that they could find on the school field.

As part of their IPC topic The Great, The Bold and The Brave our Year 6 pupils have been learning about Archimedes. They researched his life and work to write biographies, they then put their engineering skills to the test and designed and made their own Archimedes screw pumps. The pumps were successful at moving water uphill.

Over the past few months we have been working with the Education Team at ZSL London Zoo on a learning research project. Our Year 4 pupils have made three visits to the zoo and have been developing their identification and classifying skills.

A video made by the Year 4 pupils to share their experiences of working with London Zoo.